The Museum Berggruen is not as popular as other museums in Berlin even though it exhibits exquisite art. Maybe this is due to the fact that it is not located on the Museum Island in Berlin-Mitte but in Charlottenburg near the castle. A visit is definitely worthwhile. The museum displays one of the most important collections of the Classic Modern Era. The art works stem from the private collection of Heinz Berggruen. The most important parts of the collection are the works of Pablo Picasso and Paul Klee. Other artists of this era are also represented with their art such as Alberto Giacometti, Georges Braque and Henri Matisse.

Heinz Berggruen sold his collection to the city of Berlin for a price well below its market value. He even donated some pieces. It was a gesture of reconciliation with his home town Berlin. As a Jew he was persecuted by the Nazi Regime and fled the country. After being in exile for decades he returned to Berlin and dedicated his life until his death to art. 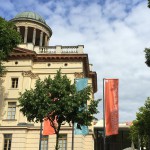